Welcome to the Aged AK Goalie

Sharing the excitement of a lifestyle change that can help friends and family get in better physical & mental health while enjoying themselves.

Several years ago (about my early forties) I learned how to ice skate after moving to Anchorage, Alaska. I learned to skate after being convinced to coach a U10 Squirt "D" level team for the local Boys & Girls Club. As I became better and better at stopping, I was further convinced to skate in the local adult "beer" league. Soon thereafter (two seasons later), someone convinced me to try being a goalie and loaned me the equipment. Within another two or three seasons, I found myself studying for and passing the referee's exam, and reffing the local adult league. This, of course, led to me refereeing youth hockey which culminated in a U16 girls game in the spring of 2009, where I took a slapshot to the lower back, ending my skating career.

I took about a decade off the ice as the rest of my life kind of took over my direction. In the fall of 2017, I returned to the ice. This time I am only playing the position of goaltender exclusively. Now, at the age of 50+, I examine the uniqueness of the position of netminder and provide an understanding of how ice hockey (and goaltending) can be a healthy, and fun, option for physical exercise.

Just as importantly, I use my connections within the hockey community, and my age (perceived as being wise), to assist in establishing legitimate mental health practices and coping mechanisms. Taking time before, and after, every game to lend an ear to players, and parents alike.

... and be sure to follow our teammates at The Goalie Guild, with their "Lift the Mask" program addressing the positive mental health needed to play the position of the goaltender, as well as generally being successful in life. Click the link below.

Images are the Property of "Lift the Mask" at liftthemask.com

How can I help? 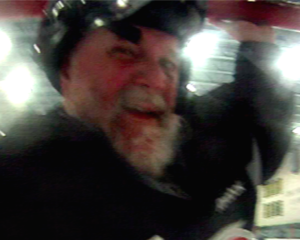 With decades of experience as a civilian chaplain, I offer a unique view of mental health. I try to help anyone who asks by assisting them in establishing practices and methods to combat any mental health issue they may be experiencing. I also work with other mental health professionals to ensure that you can apply the best methods to help you accomplish your next objectives.

How can I help YOU?

There are no upcoming events at this time.

Please check out some sites that provide some level of support to me, and the Aged Alaskan Goalie.

USA Hockey sponsors many functions throughout the US and provides guidance for rules of play. Check out their site at (http://usahockey.com). Specifically, note the adult league information at (Click Here)

Intel vs Conspiracies in today’s world,