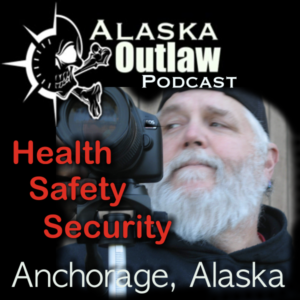 Don thy tin foil hat as we journey into the world of the slightly paranoid, and slightly psychiatric, and look at the conspiracy theories that blow up our social media networks, news stations,  and online airways across the world daily. You’re probably asking yourself “why would a show about health, safety, and survival, speak about conspiracies?” One immediately has to question anything that starts with the phrase “the government did...” As a normal, rational human being, this should be our first red flag as to the validity of what comes after. One of the greatest skills one can have when being prepared is to not listen to the misinformation that is absolutely spewed across the airwaves of this nation. A large part of being prepared is about have good solid intel to assist you in making educated decisions to better your family and yourself.

Greetings my friends, family, fellow Alaskans, and fellow Americans where you find yourself. With the potential threat of wave four of the SARS-CoV-2 virus with the new and improved B1 (Brazil) and B1.1.7 (U.K.) variants, I’ll keep you in my thoughts and songs. I hope you’ve had some time to visit my messages of hope and promise at Alaska Phoenix. Welcome to the Alaska Outlaw podcast, I am the Alaska Outlaw, and today I hope to be your guide on a journey to help us understand the necessity of good information.

A major component of misinformation is the Introduction to conspiracies. As a long-serving counter-intelligent agent, my greatest toll was the “rumor mill”. When I needed to flush someone out, I would simply tell the local gossipers that the case against them was dead, the government had dropped all charges, and there would be no more games. Building reliability and legitimacy into my story with faked information. This would ultimately relax the suspect, allowing them to be taken without incident. The whole plan depended on these “middle people” needing to feel important, offering them their “fifteen seconds of fame”. My whole tact was to create a “believable” story, which depending on the situation would require a made-up legitimacy.

One of the greatest ways of getting society to absorb the conspiracy was to connect some fabric of truth to the story. In the mid to late 1800s, here in the States, there arose the perfect rouse. Before I tell you the game to play, let me say that I do believe in the potential to communicate between this world and that of the dead. However, the story is about a game that was played on millions of Americans. This game was called a seance, and it involved an individual who would set a dramatic scene, gather people around a table, possibly hold hands, while he or she attempted to communicate with a dead relative. The unsuspecting people would inadvertently offer clues as to the validity of the information passed on by this fake medium. By posing “visions” as questions, the medium could guess their way through an impersonated meeting with a relative. Because these people are desperate to connect with a loved one, they, unfortunately, would believe even when the medium didn’t provide any real information. This game remains in full force today, simply with a different face to it.

As I mentioned, one of the greatest tools in providing misinformation to the masses is the use of conspiracy. They use the age-old method of giving a form of legitimacy to their story by involving the US government.  Some of these conspiracies are:

Aliens this one is absolutely hilarious. While I don’t disagree with not being alone in the universe, I am over the moon with fits of euphoria with people believing the “government captured a little green man”. That shit is hilarious! What makes it even funnier, is the belief that our government could keep it a secret. But wait, maybe the newly formed Space Force, with its Space Rangers and Space Cadets, will use it as a mascot. I’m in tears!

A recently promoted front-runner in the conspiracy games is the many different ones surrounding the pandemic. This one keeps me seriously entertained as there are some really stupid people who have somehow bred other even more stupid people.

Power brokers explain differences between men like Gates and others who influence the governmental decisions that they want. They rely on you NOT voting, or with you accepting whatever the government gives out.

There are tons of conspiracies out there, however, our government can’t keep a secret to save itself from falling in a hole. Especially in these modern-day times of instant news, brought on by the technological wave of cell phone cameras. Making everyone a reporter of their eyewitness account of the news. With everyone on the continent needing their “fifteen seconds of fame”, any secret our government claims to have is already spread across the world by the many traitors of the country. Fact. Men like Snowden and what his or her name? Army dude? I don’t remember. But, they demand their time in the spotlight.

Honestly think about it for a minute. Think about the possibility of Russia, China, and the United States, setting all their differences aside long enough to collaborate on a conspiracy against the American people. They have set aside all the threats of war, and disagreements over embargo’s, even side aside their internal genocide, to make sure that the American people believe this story about a pandemic. Hell, think about the possibility of President Biden and former President Trump agreeing to continue the game. It just doesn’t add up. They can’t agree on which bathroom to use and yet, they agree on the pandemic.

How do we combat misinformation? The same way the millions of operatives around the world do it. The study, and do their research. They make sure that several different (reliable) sources agree. They read volumes of books about the subject, they make damn sure they know every last detail before engaging in anything. Prevent ergonomic disorders by keeping wrists in a neutral position and do not bend backward.”
--100SimpleBooks