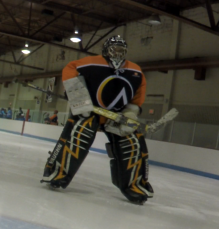 Opening night for the Fall Session of AAHL Beer League in Anchorage, Alaska. I suited up for a Novice level game at the Ben Boeke Ice Arena here in Anchorage as the goaltender for my Arctic Solar Ventures team.

Still nursing a strained left bicep, and associated fragmented break on the inside edges of my same side radial bone head, I removed my elbow wrap to suit up tonight. Last Friday morning I awoke to a searing pain in my lower back, however, it seemed to have cleared up by the time I stepped on the ice.

Warm-ups went uneventful with a full stretch being taken before facing the players warming up their shots. Glove hand felt a little weak with the grab, but I was able to play quite a few successfully. It was at this point I realized that I had pits in my skates the depth of a dime. Anyway, at this point, I was feeling pretty good.

Puck drop and things didn’t change much as most of the play stayed at the other end, I let my mind wander to the things I needed to get done. A couple of scoring opportunities by the opponents I was able to quash, as we went into the first intermission we led 1 – 0.

The second period brought out the aggression of the other team, and they got me on a roller from the low (my right) drop circle. I attempted to paddle down, however, I found that I was out of position (improperly expecting) the pass, and just got beat. Again, play primarily took place at the other end, however, I was able to get in the way a few times. We went into the second intermission with a 2 – 1 lead.

The third period was where the play began to come back, staying primarily in the neutral zone with tennis-type play going on. Certainly bracing for a quite a few break-aways that almost reached me, with two actually able to sink their shots into the net over my right shoulder. Again, I misread the play and found myself over-committed to the deep left corner, as I dropped to cover the left pipe, my momentum pulled me out of position to react to the high right corner shots. When we lined up to shake hands at the end the final score read 3 – 3. So, there we go into the Fall session. We’ll see how this shakes out.

Overall, I left the ice in no immediate pain and felt that my “on-ice” saves were moving in the right direction. Need to work on separating my gloves from my legs when dropping into a butterfly as two of their goals were obtained when I had dropped, moving left, taken the blocker down with me. I’ve got to work at keeping those gloves higher up.

When carrying heavy objects, the anchor is with your body and keep it close to you to avoid additional strain from the weight.”
--100SimpleBooks