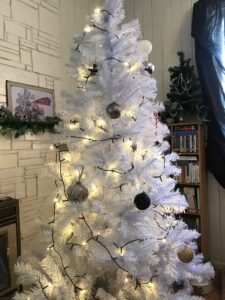 As the Christmas bell-ringers at every store begin their quest to garner the financial support of their community, we see both, the benefit and the detriment, to remembering that the holidays are here. As the nation continues to struggle through the ravages of the coronavirus pandemic that has plagued the United States for a complete year now, we can visibly see the effects it has had on the population. The United States has been stretched, almost to a point of implosion. Between the lingering pandemic, a vicious political cycle finally reaching a peak, and a handful of highly publicized police brutality cases, the nation struggles to scrape up its holiday spirit. Many health officials continue to warn us from gathering with members outside our immediate family bubble, leading to additional mental degradation of Americans, and most schools are still in “suspension” leaving young children home, without any type of social interaction. In, too many, cases we see the rise of domestic violence cases with potential unemployment, or homelessness as a driving factor. The current situation might be a strong candidate for the most depressive holiday season on record. However, the spirit of Christmas is stronger than that.

Over 123 years ago, a little girl in New York found the courage to pen her thoughts to the editorial staff at the New York Sun newspaper. On September 21st, 1897 young Virginia O’Hanlon penned a letter questioning the existence of that magical elf, Santa Claus. In a stroke of Christmas magic, a long-time veteran of the newspaper business happened upon the letter and decided to provide a response to the young reader. The rest is part of the magical history of Christmas. To complete the magic, I think his response is absolutely worth repeating. With no further ado, the response to Ms. O’Hanlon’s letter by veteran newsman Mr. Francis Pharcellus Church.

“ VIRGINIA, your little friends are wrong. They have been affected by the skepticism of a skeptical age. They do not believe except they see. They think that nothing can be which is not comprehensible by their little minds. All minds, Virginia, whether they be men’s or children’s, are little. In this great universe of ours man is a mere insect, an ant, in his intellect, as compared with the boundless world about him, as measured by the intelligence capable of grasping the whole of truth and knowledge.

Yes, VIRGINIA, there is a Santa Claus. He exists as certainly as love and generosity and devotion exist, and you know that they abound and give to your life its highest beauty and joy. Alas! how dreary would be the world if there were no Santa Claus. It would be as dreary as if there were no VIRGINIAS. There would be no childlike faith then, no poetry, no romance to make tolerable this existence. We should have no enjoyment, except in sense and sight. The eternal light with which childhood fills the world would be extinguished.

Not believe in Santa Claus! You might as well not believe in fairies! You might get your papa to hire men to watch in all the chimneys on Christmas Eve to catch Santa Claus, but even if they did not see Santa Claus coming down, what would that prove? Nobody sees Santa Claus, but that is no sign that there is no Santa Claus. The most real things in the world are those that neither children nor men can see. Did you ever see fairies dancing on the lawn? Of course not, but that’s no proof that they are not there. Nobody can conceive or imagine all the wonders there are unseen and unseeable in the world.

You may tear apart the baby’s rattle and see what makes the noise inside, but there is a veil covering the unseen world which not the strongest man, nor even the united strength of all the strongest men that ever lived, could tear apart. Only faith, fancy, poetry, love, romance, can push aside that curtain and view and picture the supernal beauty and glory beyond. Is it all real? Ah, VIRGINIA, in all this world there is nothing else real and abiding.

Merry Christmas to all, and to all a good night.

Clean up after yourself. Don’t rely on the cleaning crew to maintain your work station for you.”
--100SimpleBooks