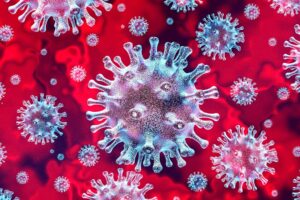 SARS-CoV-2 (COVID-19) Continues it’s an ongoing attack against Americans, as the first documented case of the variant B.1.1.7 arrives here in Anchorage, Alaska. To better understand the infection here in the United States, we must take a short walk through the history of SARS-CoV-2 infections. In December of 2020, the first variant (B.1.1.7) was discovered in the United Kingdom. The most important concept to take away from the variants that have surfaced has been that they are more easily transmitted from host to host. From the original SARS-CoV-2 virus strain came the B.1.1.7 variant (first identified in the U.K.) which has now spread throughout the world. This was followed quickly after by the B.1.351 variant which was first discovered in South Africa. Recently, a third mutation of the virus, the B.1.1.28 subside which was noted out of Brazil, South America, that landed in the United States over the last couple of weeks. The same E484K mutation, which has been shown to reduce neutralization by convalescent sera and monoclonal antibodies, demonstrated a vast increase in its ability to spread much more quickly from host to host, as well provided a little more resistance to less than vigorous prevention methods. These variants provide a substantial concern for the medical community, as designated resources are already at capacity.

However, the good news for most Americans, are two-fold today: 1) They are destroyed as easily as the original SARS-CoV-2 virus strain with masking, hand-washing, and social distancing, and 2) all the current vaccinations include a level of immunity to these variants, and the vaccines are being distributed (with a concentrated effort by our current administration to accelerate the distribution even more). Unfortunately, these variants are entering into our circles while the designated hospital beds throughout many states are being overwhelmed, leaving very little resources available for the accelerated infection rates associated with these new variants. So, as Americans come to terms with these new evolutions of the virus, we must have a renewed commitment to protect ourselves, and our loved ones with a concentrated effort to double down on our protective measures.

1. Vigorous, frequent hand-washing (for more than 20 seconds)
2. Keep our circles small, and avoiding large groups at all costs.
3. Masking up whenever outside of immediate bubble (double masking is being requested by CDC)
4. Social distancing. While the standard is six feet (2 meters), the outside spread maybe even further.

Finally, wherever you are, regardless of your beliefs, be a part of your community by getting immunized as soon as possible. The vaccines are being distributed as quickly as possible to ensure the distribution path assists in the hopes to curve the infection of designated groups.