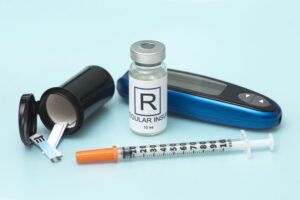 Throughout the last two decades, the average cost of insulin has not doubled, tripled, or even multiplied by 10. In 2001, the cost of insulin was $.05 per unit, with a singular syringe holding 30 units (about 3/10 cc) for a total of about $1.50 for a singular syringe. In 2018, that cost has risen to $.27 per unit, with that syringe holding the same amount now costs $8.10 per syringe. This is an increase of 550% spanning 17 years. Now, I know exactly what you are going to say, “oh well, they have been maintaining it, making it better”. This is not the case when it comes to insulin. There are been no marked changes in the ingredients and/or functions of insulin since the “fast-acting” came out before 2001. So, what then, is the cause of this meteoric rise of costs? Greed. Pure and simple. There is a substantial population of persons throughout the United States that absolutely require insulin to continue living. Now, the 45th President of the United States renegotiated Part D of Medicaid with the manufacturers of insulin to ensure that the costs were reduced to much more moderate levels for specifically for aged Americans, however, there is a substantial amount of T1Ds that have not had said relief or do not qualify for Medicaid. Some of these individuals have no alternative but to ration, or forego, the purchase of their insulin due to the astronomical costs, and unfortunately some pay the ultimate price for this.

My wife is a long-term T1D, being diagnosed when she was but a little girl of seven years old. Now, back in those days, the idea of diabetes management was a pipe dream, as most diagnosed simple focused their attention on “surviving”. Without accurate methods of measurements, and based on “feelings” and symptom avoidance, many Americans who contracted this disease succumbed to either: the disease itself, but more often, one of the many complications. Strokes, heart attacks, and a multitude of other medical issues accompany T1D. My wife has been prescribed and uses an insulin infusion pump, then injects additional insulin on top of what the pump provides, and using an approximation of her usage per day, she uses 100 units per day. At 100 units per day, at $.27 per unit, this is $27 per day or $9,855 per year. That is just the cost of insulin! This does not include the costs for the pump infusion sets (connecting the insulin pump to her body), a Constant Glucose Monitor (CGM) which monitors her Blood Glucose (Bg) levels. By monitoring the Bg levels, the pump can adjust her rate of flow, keeping her at a safe level. In addition, the control of her life, like mealtimes, and other things already makes it challenging being a diabetic, having to fork out almost $10K a year for life-sustaining medicine is absolutely ridiculous!

In 2016 the US Congress conducted an oversight hearing on the price gouging of the Epi-Pen product by the manufacturer, as some surmised that the drug was critical to life function, especially among those who had severe allergies where the Epi-Pen could be used to save lives, had increased 500% in about nine years. Heather Bresch, the CEO of Mylan who had acquired the rights to the Epi-Pen product nine short years before the hearing was conducted, testified at the hearing. Like most hearings in the oversight committee in the US Congress, while there was some finger-pointing, and name-calling, nothing was, nor could be done to dissuade the organizational behavior of price gouging those who need the drugs these companies are making.

Where are the hearings about insulin? That’s a real good question, and to date, there is nothing on the agenda for Congress to consider. Yet thousands of Americans are more dependent on insulin than Epi-Pens, yet, here we are.